Founded in 1901 in Napoli, Italy, by Raffaele Esposito under the name Società Fonografica Napoletana (the current name will be adopted in 1911), was the first record company born in Italy, and among the first in the world to have an autonomous establishment for the manufacture of disks.

The Vis Radio Discografica funded in 1948 by Aldo Scoppa as an internal derivation of the company that designed and assembled radio, in the foresight to invest in the production market of new artists, especially Neapolitans. His artistic directors were Loris de Rosa and Mario Landi.

The main office was in Naples, in Corso Umberto I 132; he then had two other offices, in Milan in Via Larga 11 and in Via Stoppani 6 and in Rome in Via Flavia 72. He was also the owner of his own recording studios, in Via Cupa Cajafa in Naples.

Over the years he has produced many artists, continuing to support the melodic and neomelodic genre. His most famous singer, in the early years, was undoubtedly Claudio Villa, who published all 78 rpm for Vis Radio which he recorded from 1949 to 1956; other well-known artists were Mario Abbate, Gabriele Vanorio, Maria Paris, Gloria Christian, Leonardo Cabizza and Maria Teresa Cau (Logudoro Quartet), Virginia From Brescia, Alvaro Amici, Nunzio Gallo, Gino Da Procida, Gianni La Commare, Mirna Doris, Georgia Moll , the Campanino, Mike Fusaro, Carlo Missaglia and many others.

Like other record companies, Vis also had a sub-label, the Dominator, which was mainly specialized in orchestral music.

In the 60s, after reaching the verge of bankruptcy, the record company Vis went through a corporate restructuring procedure, with the closure of the branch offices. Subsequently, Scoppa sold Vis Radio to Mara Del Rio and Franco De Paolis.

Cetra Records (the name stands for “Compagnia per edizioni, teatro, registrazioni ed affini”) was an Italian company established in Torino April 10, 1933, which produced opera recordings. It was established on the initiative EIAR (Ente Italiano Audizioni Radiofoniche), who decides to transform the “Edizioni musicali Radiofono” , active since 15 September 1923 (and owned) in the record company, and changed its name in “Cetra Società Anonima”; later the company will become a s.p.a. the December 16, 1957 is joined with the Milano record company Fonit.

The company achieved something of a triumph in the early 1950s when it produced many recordings of obscure or seldom heard Verdi operas to coincide with the 50th anniversary of the composer’s death in 1901. Cetra recordings are often now reissued by the company Warner Fonit Cetra. Cetra opera albums were distributed in the United States on the Cetra-Soria label (founded by Dario Soria and Dorle Soria, who later founded Angel Records). Beginning in 1966, several Cetra opera recordings were issued in the United States by Everest Records.

Cetra Records also produced popular music recordings from at least the World War II years through the 1960s. One of their instrumental artists is accordionist Michele Corino, a soloist with Italy’s prominent “Orchestra Angelini” until he moved to San Francisco, California, in 1948. “Mike” ran a prominent accordion studio in “North Beach Music” (a.k.a. Corino Music) and taught, worked and recorded with brothers Fabio and Gianfranco Giotta, part of the San Francisco-based Caffe Trieste (see also “Cavalier Records”, “Caffe Trieste” and “Trieste Records”). Gianfranco shared the studio with Mike on the 1963 Cetra album titled “Rome to Paris”.

Compagnia Generale del Disco, also known as CGD, was an Italian label active between 1948 and 1988. It was founded by Teddy Reno.

In 1959 the label was acquired by Sugar Music and distributed by Messaggerie Musicali.

In 1966 had a deal with CBS to distribute its catalog in the Italian market, thus forming CBS Sugar in 1970, which last until 1977.

In 1988 it was acquired by Warner Music Group to form CGD East West, until early 2000’s when the label was merged into Atlantic.

Durium SA was founded in 1935 in Milan (originally as Durium La Voce dell’Impero) by a group of Milanese entrepreneurs including Martinengo and Alberto Airoldi, who became its president. The headquarters were in Corso Garibaldi in Milan and production covered both discs and sound producers.

The first records released were recitations of tales for children, and other productions aimed at emigrants and troops abroad. In the years 1935/1936 – lacking the material for the production – discs were also published on cardboard supports, containing language courses, technical courses, and propaganda. With the outbreak of war the offices and some recording studios were transferred from Milan to Erba.

At the end of the Second World War after the return to Milan in the new headquarters in the passage of the Osii 2 the company, meanwhile become Durium, moves the administrative and representation offices in via Manzoni. The core of what will be the burning and printing remains in Erba.

In 1977 Durium reached its peak with a net sales increase of 35% compared to the previous year, for a total of 6.25 million dollars at the time.

Like many other record companies, Durium also gave birth to some sub-labels of which the best known is the Italian Targa, which has also released some albums and 45 rpm of Vasco Rossi; in addition, Durium distributed other labels such as Sprint, Titanus and Karim.

It was founded in 1904 as a branch of the Lindstrom Phonograph Company of Berlin, which had Odeon as its main label. Fonotipia also had an office in Paris where it recorded French artists, issuing most of the results on Odeon rather than Fonotipia.

By 1922, Fonotipia had become a partner of Odeon Records, and in that year a new, conventional 10″ series numbered 152000 was begun.

The Fonotipia Company changed hands countless times, but managed to stay in business until 1948. 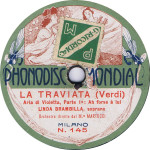 Phonodisc Mondial was a small record label which produced for Fonotipia the early ‘1900 for just one year.

Fonit was an Italian label, active between 1911 and 1957, then merged with Cetra to Fonit Cetra.

Fonit was established in Milan (IT) in 1911 on the initiative of Mario Trevisan.

The name is an acronym for FONodisco Italian Trevisan.

Very fast Fonit became one of the leading companies in the Italian record market.

In the 50s Fonit it continues to have a prominent position in the market, thanks to artists like Natalino Otto, Peter Van Wood and Domenico Modugno.

At the 16th December 1957 the record labels Cetra and Fonit decided to merge into a new company called Fonit Cetra; Fonit brand continues to exist within the new company.